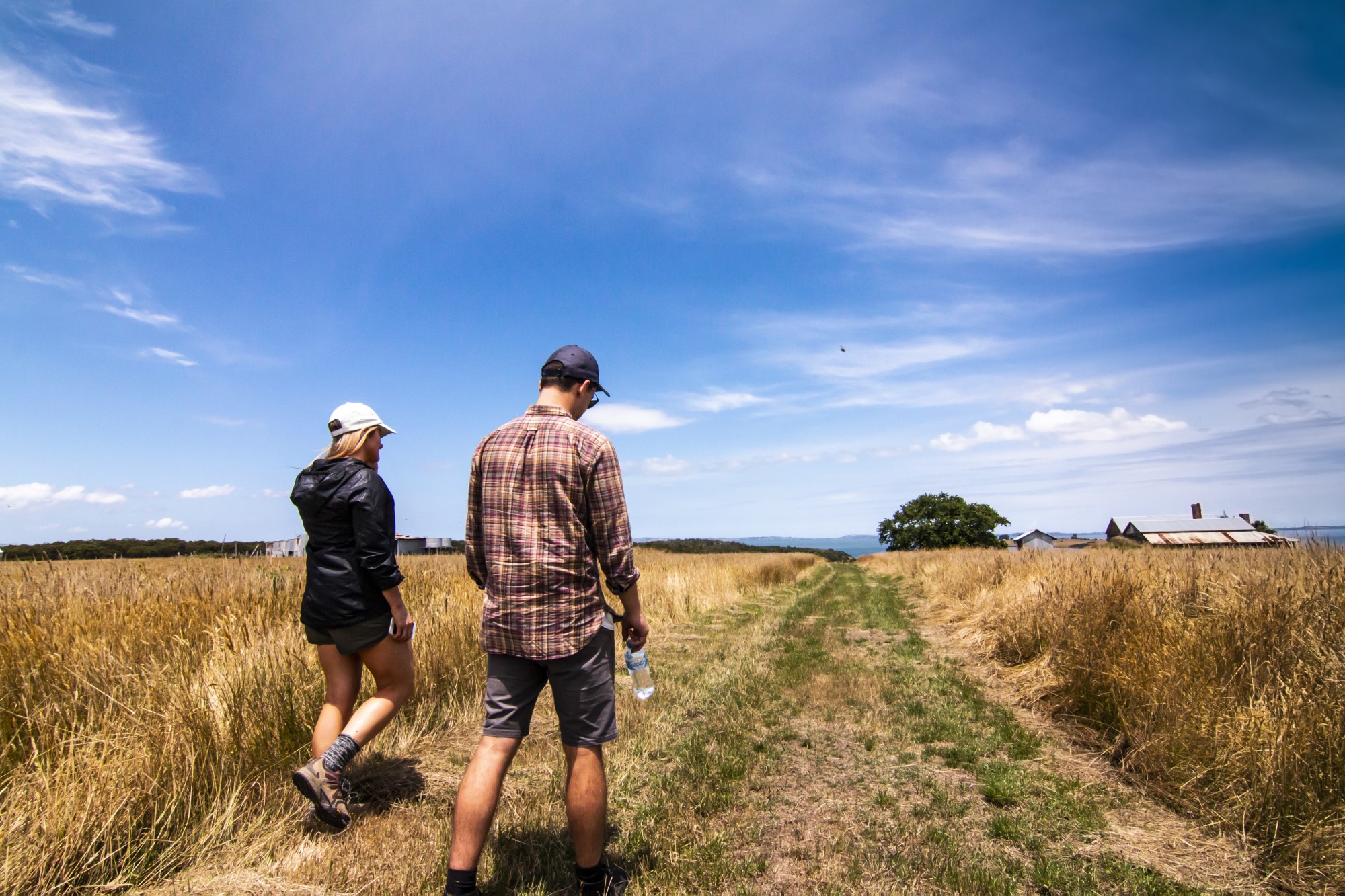 French Island is a unique destination located in the middle of Western Port, and is the largest island in the bay, (approximately 170 square kilometres).   The island runs completely off the grid with no mains water or electricity, there is virtually no traffic, and famously, Kylie Minogue once owned a holiday home here.  Accessible only by ferry, it is a 15 minute fast cat ride from either the Mornington Peninsula or Phillip Island. Due to its isolation, history and the work of conservationists over the last 40 years, French Island remains a relatively undisturbed environment, less than 70km from the heart of the city of Melbourne. Two thirds of the island is National Park and is a perfect destination for nature lovers, walkers, cyclists and those wishing to escape the madding crowds.

Prior to European settlement, French Island was used as a hunting ground by the Aborigines of the Bunurong tribe. They lived on the mainland and travelled to French Island to collect shellfish and swan eggs. There are several registered sites on the island of the shell middens and stone scatters they left behind. The island was named in 1802 by a French scientific expedition on board the ship, L’Naturaliste. This team circumnavigated the island and named it Isle des Francais. English settlers called it French Island. The first European settlers arrived about 1850 and the population grew sporadically over the following years, encouraged at times by governments offering incentives to unemployed folk in times of depression. Early exports from the island included (with varying degrees of success) salt, chicory, meat, milk, vegetables and seaweed. Due to the harsh, isolated conditions many settlers returned to the mainland. However, French Island is still home to descendants of those early pioneers. The island also became home to a prison in 1916. It operated a self-sustaining farm until it closed in 1975. In 1979, part of the prison farm and the Crown land on the island were reserved as a State Park. The Park was expanded in 1990 and again in 1997. At this time, it was also proclaimed a national park. Today, the French Island National Park occupies two-thirds of the island while the other third is privately owned. In 2000, French Island became a part of the Mornington Peninsula and Western Port Biosphere Reserve, one of only four in Victoria and 440 in the world. It is hoped that the Biosphere will be a place where people can show the way to a more socially, environmentally and economically sustainable future.

About two-thirds of French Island is occupied by the French Island National Park. As well, the French Island Marine National Park extends approximately 15 km along the northern shore of French Island encompassing approximately 2,800 hectares. The Park protects wetlands and a rich variety of native flora and fauna, much of which is of national and international significance. This includes a vast number of migratory birds.The French Island National Park extends 150 metres offshore from the mean high water mark right round the island, which provides for around 960 hectares of inter-tidal Park area. French Island is home to approximately 260 fauna species, 230 indigenous birds and 580 species of flora including over 100 species of orchid, many of which are unique. Unlike mainland Australia, it is has no foxes and is free of phytothera (cinnamon fungus or dieback). The island is also host to a healthy koala population. Koalas were introduced in the early part of the 20th century and the island now boasts one of the leading disease free populations in Australia. French Island’s koala’s are used regularly to re-stock depleted colonies on the mainland, ensuring the survival of the species.

French Island has a permanent population of about 110 people and a part-time population of around 100. With no road link to the mainland residents must be largely self-sufficient and have a keen understanding of water and electricity use, since they are responsible for both. More and more residents are embracing the latest solar and wind technologies, while old diesel generators are still used for back up. Household water is collected in rainwater tanks. To date, rainfall on the island has been sufficient to sustain most households with about 15 mean rain days per month and a total of 127 rain days per annum, mostly in the winter and spring. While farming and tourism are the main industries on the island, islanders also offer a diverse range of skills and can deliver a variety of services including art and craft, building, earth moving, fencing and more. Farm produce includes organic and grass fed cattle, sheep and chickens, organic olives and oil, apricots, various nuts, honey, biodynamic produce and wine. The island boasts a general store and post office, a primary school (one of the smallest in Victoria), a community hall, a cricket ground and a Parks Victoria office. All the island’s roads are unsealed and are graded twice a year, though they can become impassable in heavy rains. The only other service is a radio-link to the mainland for telephone services. Some islanders now rely on satellite and other wireless technologies for communication. French Island is one of only a few unincorporated locality in Victoria, meaning it has no municipal council. Instead, residents and landowners deal with community issues through the French Island Community Association.